This blog is published chronologically. Go straight to the most recent post.

A garden lost in time

"Abandoned for fifty years, with the house and garden overgrown and crumbling, the restoration of Aberglasney is one of the country’s most remarkable garden projects"

Aberglasney? You’ve never heard of it? Well, yes, I guess it must be one of the best-kept secrets in Wales. Some may have heard of the Lost Gardens of Heligan, found somewhere in England’s West Country. Aberglasney is the Welsh equivalent - a garden lost in time. It’s located in the Tywi valley, just off the A40 at Llangathen in Carmarthenshire, between Carmarthen and Llandeilo, in South Wales. It’s a little gem. 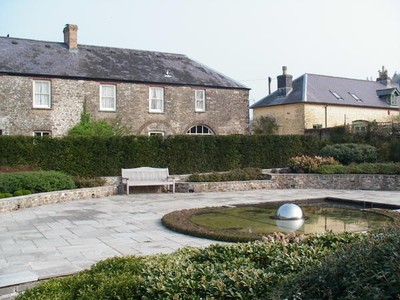 At left, the two holiday cottages (the pale yellow building on the right is the estate's offices),
with the sunken garden in the foreground.

Sitting here in the sun on the south-facing stone patio of the Coachman’s Cottage (we could have chosen the equally-attractive Gardener’s Cottage next door), all is tranquil. Only the chattering of courting jackdaws, the sound of a silver globe fountain in the sunken garden opposite, and the distant ‘baa’ of sheep in the surrounding fields can disturb us here. 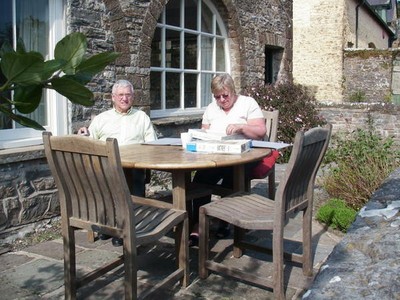 The cottage itself is excellent. Whoever was responsible for its restoration did a great job. It’s five-star in every respect - great attention to detail, spotlessly clean, and very welcoming with fresh flowers in most rooms and some expensive china and glass containers. The estate’s Director called by on our first evening to welcome us - it transpired that our lounge was once used as his office and his receptionist occupied what is now our kitchen! There are two large bedrooms, each with an en suite bathroom, a huge lounge with two settees, television, DVD player, video, radio, and a medieval-looking chest full of books, magazines and jigsaws. The kitchen, equipped with everything you’ll need, including a high-quality cooker, hob, microwave, toaster, dishwasher and washing machine, doubles as the dining room with its enormous refectory table. A week’s rental would cost from £295 to £800 a week in 2007, depending on season.

The gardens will keep you occupied for many hours. As residents, we had free access whenever we wished during opening times. Needless to say, it was a particular pleasure to wander among some of the parts near the cottage at other times too, undisturbed by any other visitors. 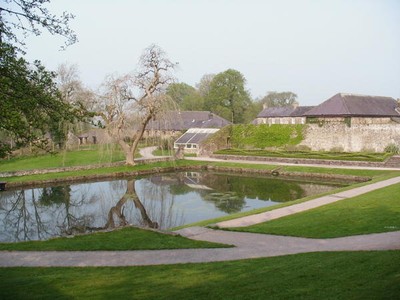 Leaking, silted up and overgrown when discovered, the pool has been restored
to good health. In antiquity, it would have been used for breeding or stocking fish. 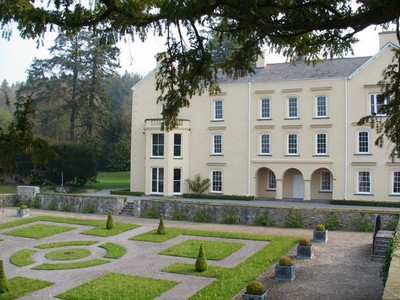 Although there are a few steps in places, most of the gardens are accessible to the disabled - fortunately as Pat was in the final stages of convalescence from her knee replacement operation. At this time of year, there was not the riot of colour we experienced on our previous visit. There were, however, some real jewels: the dainty white Narcissus ‘Pueblo’, multi-petalled Sanguinaria candensis, the creamy-white tulip-like blossom of Magnolia ‘Elizabeth’ and pretty pink stars of Magnolia stellata ‘Jane Platt’ - to name but a few. 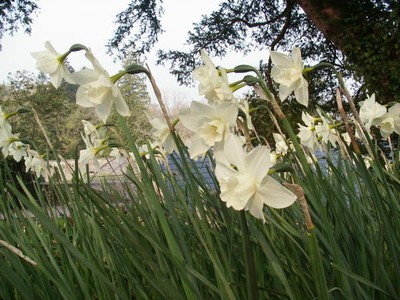 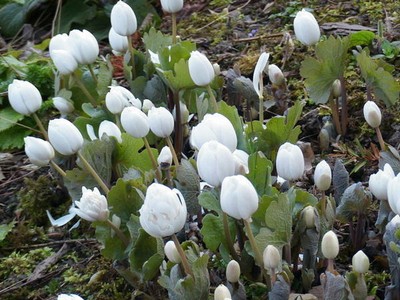 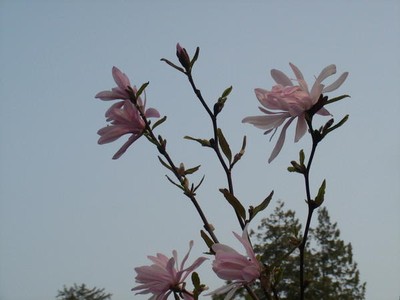 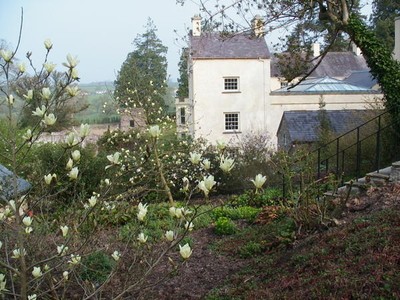 The carefully-raked tilth of the walled garden suggested a vibrant display of vegetables and flowers to come during the months ahead. Once upon a time, an estate of this size would have had dozens of busy gardeners but, today, we saw less than can be counted on one hand. 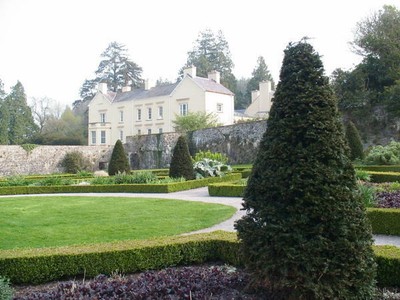 Aberglasney’s history spans many centuries, although much remains a mystery. Around the time of Henry Tudor, five hundred or so years ago, there were said to be nine gardens here. The house was among the largest in Carmarthenshire when it was built by Bishop Rudd in the mid-1600s. Since then, the fortunes of this place have risen and fallen. Eventually, abandoned shortly after World War II, the house was derelict and its gardens were man-high with the pernicious Japanese Knotweed when the Aberglasney Restoration Trust came to its rescue in 1995.

Many of the garden structures have survived the ravages of time, painstakingly uncovered by archaeologists and gardeners alike. The house, restored externally, needs millions spending on its interior.

One part, created from the ruined central rooms of the historic mansion with an added glass roof, has become a unique sub-tropical garden. Called the Ninfarium (its name is derived from a garden within the ruins of a medieval village at Ninfa near Rome), this imaginative garden contains a collection of orchids, palms, magnolias and cycads. 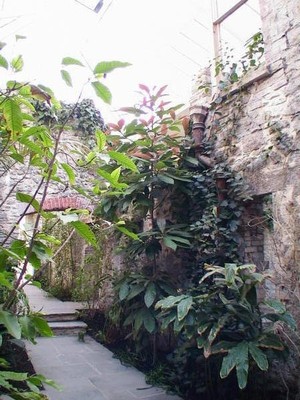 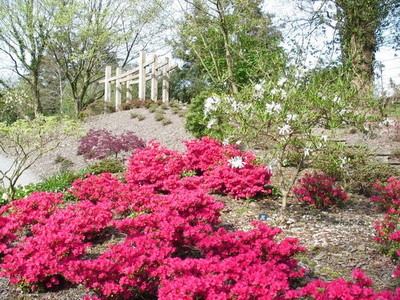 This new Japanese-inspired garden is in the hillside area known as Bishop Rudd's Walk.
Bishop Rudd was responsible for building of the original house. 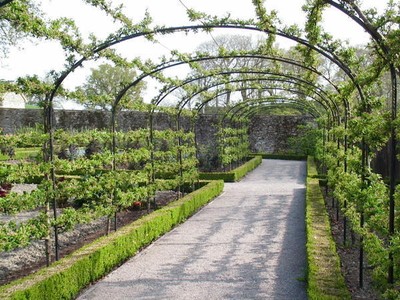 Just coming into bloom, this arch of trained crab apples is part of the Kitchen Garden 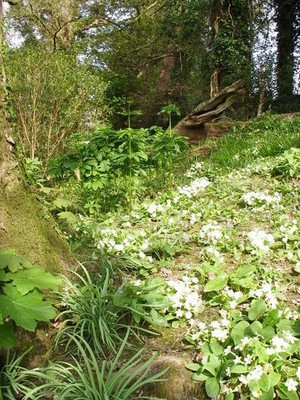